Udaipur: Of love, loyalty and treachery

One of my favourite Hindi couplets, which I learnt in school went like this:

And, in my mind, I would picture this:

A brave warrior mounted on a crippled horse, fleeing for his life,

He reaches a raging river; as the enemy forces close in on him

But suddenly, his adversaries are helplessly staring at him from afar

He looks down, to find his faithful steed, crumpled on the ground

And sees the glow of devotion in its eyes, before they close forever. **

In truth, the “boundless river” may have been more like a small brook, and the Maharana actually owed his life to the sacrifices of many others, in addition to his horse.

But then, why let these details get in the way of a good poem?

Let’s take a step back, for a brief lesson in history.

Maharana Pratap Singh was a ruler from the Sisodia clan of Rajputs, and the son of Maharana Udai Singh of Mewar.

Udai Singh had founded Udaipur as the new capital of his kingdom in 1559, after the Mughal emperor, Akbar, conquered Chittor.

Pratap Singh resolutely refused to accept the vassalage of the Mughals (considering them “foreigners”), even as other Rajput rulers (and even his own brothers) switched allegiance to the increasingly powerful empire.

Folklore has it that during the famous battle of Haldighati in 1576; faced with imminent defeat at the hands of a Mughal army that far outnumbered their own, Maharana Pratap Singh’s lieutenants convinced him to flee the battlefield. His trusted horse, Chetak, was badly injured during the fighting, but carried his master to safety, before collapsing to his death.

It is said that on his deathbed, Maharana Pratap asked his son, Amar Singh to avow to remain independent from the Mughals.

Mewar eventually became a princely state of India under the British in 1818, even siding with the British during the Rebellion of 1857.

Post-independence, the state acceded to India.

To date, the royal family of Mewar continues to reside in the City Palace, which was built over 400 years by more than 20 generations of their ancestors.  The head of their family (though who that is, is currently disputed) is still considered the symbolic ruler of Udaipur.

The gallantry of a patriotic father brought to nought by the cowardice of his son… or the delusions of an egomaniacal ruler, quietly discarded by his pragmatic successors?

However you may choose to see the course of its history, one thing is for certain – Udaipur is an absolutely charming place.

There is a romance in the russet Aravallis that form a beguiling backdrop to the city; 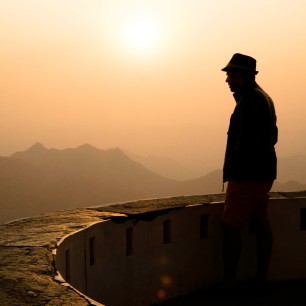 Sunset behind the Aravallis

Sunset behind the Aravallis viewed from Lake Pichola

In the serene waters of its lakes that light up with different multi-colored reflections depending on time of day;

City Palace and the Old City at dusk

In the grandeur of its palaces where you can re-live the bygone era of opulence; 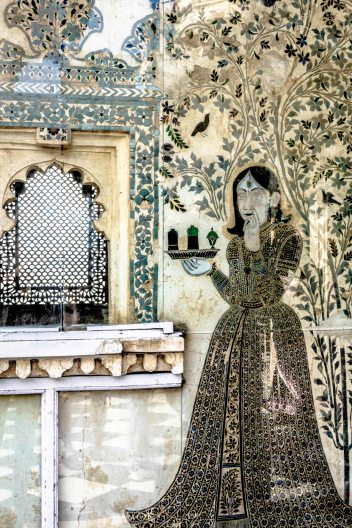 View of the city from Monsoon Palace

City Palace and a view of the city

And of course, in the legendary story of devotion between a man and his mount, evidences of which abound throughout the city.

* A rough literal translation of the couplet is – “ A boundless river lies ahead, how will my horse cross over? While the Raana was thinking about this, Chetak had already reached the other side!”

15 thoughts on “Udaipur: Of love, loyalty and treachery”

Tell me what you think! Cancel reply